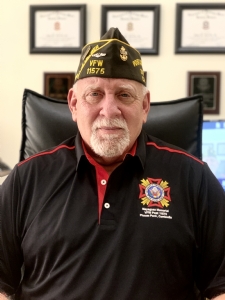 Commander Farrell was born in Rochester, New York, and presently resides in Phnom Penh, Cambodia. He retired from the US Navy Silent Service (Submarine Force) in 1996 after 22 years of service as a Radioman Chief Petty Officer.

Commander Farrell upon retiring from the US Navy was employed by Harris Corporation, RF Communications Division as an International Country Manager responsible for the development and execution of Tactical Radio Programs in the Middle East and Northern Africa. He worked there until April 2011 until his retirement after 16 years of service.

Upon his retirement, he relocated to Thailand and subsequently Ban Chang Thailand and Joining VFW Post 12146 Banchang-Utapao, Thailand.

Upon completing his term as Commander of the Post and achieving All American and All State status. He relocated to Phnom Penh, Cambodia to assume Command of Mayaguez Memorial VFW Post 11575.

Commander Farrell as Senior Vice Commander and Inspector General for District V which includes Thailand, Cambodia, and Australia provides leadership to a total of 8 VFW Posts in the region.