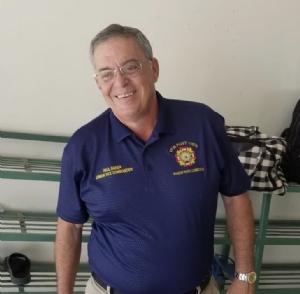 Senior Vice Commander Paul Baker was born in Boston, Massachusetts and enlisted in the U.S. Army in 1982 upon graduating from Drake University.  He was looking for adventure in his life and the Army was happy to oblige, deploying him as an infantryman(11B) along the DMZ in Korea with the 1st Battalion, 31st Infantry Regiment, 2nd Infantry Division.
Upon completion of his military service Comrade Baker worked as an air traffic controller for the Federal Aviation Administration, retiring in 2010.  He was then employed as air traffic controller at Baghdad Airport working in support of U.S. forces in Iraq.  Upon completion of that contract, he returned to work as an instructor at the U.S. Government's Aviation Academy in Oklahoma City.
Comrade Baker has lived permanently in Phnom Penh since 2017 and is making a valiant effort to learn the Khmer language.  He travels extensively throughout Asia to satisfy his passion for scuba diving.  He has been sighted occasionally in bars throughout the city.