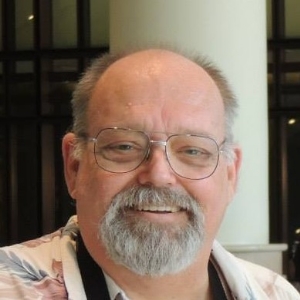 James "Jim" Gilmore was born and reared in the Indianapolis, Indiana suburb of Beech Grove. And Jim was also the recipient of 13 years of Catholic Education. He says, You can't scare me, I was taught by Nuns!

After graduating high school, Jim Gilmore joined the US Air Force and is a Veteran of 12 years (from 1970 through 1982). His duties took him to U-Tapao RTNA, Thailand in 1971 in the winding down years of the Vietnam War. At the completion of that tour spent the next year in South Vietnam serving as a Quick Service Refueling Supervisor on Cargo aircraft at DaNang and later at Tan Son Nhut. During his military career Jim served as a heavy jet aircraft mechanic (B-52/EC/RC/KC-135/C-5/C-141), machinist and also an air traffic controller.

After the Air Force Jim worked as a radio and TV air personality for eight years in addition to working a "day job" as a machinist for the then Detroit Diesel Allison Division of General Motors, now Rolls-Royce America.

In 1989 Jim went to work for FedEx Express where he worked as a courier, dispatcher and an aircraft de-icing crew lead. He also saw international duty with FedEx working in Seoul, South Korea for 6 months just after 9/11.
Jim Gilmore retired medically from FedEx in 2004 when the VA rated him permanently and totally disabled. In August of 2005 Jim moved to Thailand.
In 2007, Jim, along with two other veterans, Chris Palombi and Michael Holmes helped establish a network of hospitals throughout Thailand that have agreed to treat Veterans with service connected conditions for no out-of-pocket funds. That network started with two hospitals and one clinic and has expanded now to two clinics and nine hospitals throughout the Kingdom of Thailand.
In February of 2019, Jim became a Department of Veterans Affairs Accredited Claims agent. He is now certified to prepare, present and prosecute Veteran's claims before the Veterans Benefits Administration (VBA).
In his role as the Post 11575 Service Officer, Jim's priorities are to assist veterans in filing for benefits through the VFW. He places the VFW ahead of his role as a claims agent but will never deny any veteran asking him to represent him individually.